UFOs and the Internet 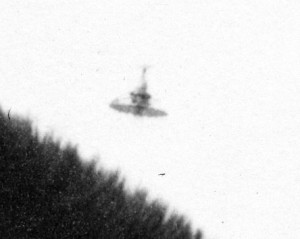 [This summer marks the 50th anniversaries of the first modern publicized report of UFO phenomena by Kenneth Arnold in June 1947 and the “Roswell incident” in July 1947. This column is much abridged from the articles “How to Build a UFO … Story” (Internet Underground: November 1996) and “Stalking the UFO Meme on the Internet” (South Africa Computer Magazine: April 1997). The article was also included in Digital Delirium (eds. Arthur and Marilouise Kroker: St. Martin’s Press: 1997). A full copy will be archived on the ThiemeWorks web site — coming this summer.]

“We are convinced that Roswell took place. We’ve had too many high ranking military officials tell us that it happened, that told us that it was clearly not of this earth.”

Don Schmitt, co-author, “The Truth About the UFO Crash at Roswell,” in an interview on the Internet

That “interview with a real X-Filer” can be found on one of the hundreds of web sites — in addition to Usenet groups, gopher holes stuffed with hundreds of files, and clandestine BBSs where abductees meet to compare “scoop marks” — that make up the virtual world of flying saucers.

The UFO subculture or — for some — the UFO religion on the Internet is a huge supermarket of images and words. Everything is for sale — stories, pictures, entire belief systems. But are we buying a meal? Or a menu?

When Schmitt uses the word “Roswell,” he is not merely identifying a small town in New Mexico that put itself on the map with a terrific UFO story. He uses it to MEAN the whole story — the one that says a UFO crashed in 1947 near the Roswell Army Air Field, after which alien bodies were recovered and a cosmic Watergate initiated.

That story is scattered on the Internet like fragments of an exploding spaceship. Do the pieces fit together to make a coherent puzzle? Or is something wrong with this picture?

Stalking the UFO meme on the Internet

Memes are contagious ideas that replicate like viruses from mind to mind. On the Internet memes multiply rapidly. Fed by fascination, incubated in the feverish excitement of devotees transmitting stories of cosmic significance, the UFO meme mutates into new forms, some of them wondrous and strange. “The Roswell incident” is one variation of the UFO meme.

On the Internet, Schmitt’s words are hyperlinked to those of other UFO sleuths and legions of interested bystanders fascinated by the psychodynamics of the subculture as well as the “data.”

Before we examine a few fragments, let’s pause to remember what the Internet really is.

Copies of copies — or copies of originals?

The Internet represents information through symbols or icons. So does speech, writing, and printed text, but the symbols on the Net are even further removed from the events and context to which they point.

The power of speech gave us the ability to lie, then writing hid the liar from view. That’s why Plato fulminated at writing — you couldn’t know what was true if you didn’t have the person right there in front of you.

The printing press made it worse. Now digital images and text are on the Net. Pixels can be manipulated. Without correlation with other data, no digital photo or document can be taken at face value. There’s no way to know if we’re looking at a copy of an original, a copy of a copy, or a copy that has no original.

In addition, certain phenomena elicit powerful projections. Because projections are unconscious, we don’t know if we’re looking at iron filings obscuring a magnet or the magnet.

Carl Jung said UFOs invite projections because they’re mandalas — archetypal images of our deep Selves. Unless we separate what he think we see from what we see, we’re bound to be confused.

Hundreds of cross-referenced links on the Web create a matrix of credibility. In print, we document assertions with references. Footnotes are conspicuous by their absence on the Web. Information is self-referential. Symbols and images point to themselves like a ten-dimensional dog chasing its own tails.

Are there “eight firsthand witnesses who saw the bodies,” “many high-ranking military officials who said it was not of this earth,” or “550 witnesses stating that this was not from this earth?” Schmitt makes all of those statements in the same interview. He uses the word “witness” the way Alice in Wonderland uses words, to mean what she wants them to mean.

Tracking down the truth about the “Roswell incident” is like hunting the mythical Snark in the Lewis Carroll poem. The closer one gets to the “evidence,” the more it isn’t there. There is in fact not one “witness” to the “Roswell incident” in the public domain, not one credible report that is not filtered through a private interview or privileged communication.

There are, though, lots of people making a living from it — makers of the Ray Santilli “autopsy film,” guides for tours of the rival crash sites in Roswell, television producers and book publishers. It all gets very confusing.

Is any of the confusion intentional? Ready for a Headache?

Are government agents using the subculture to manipulate public opinion? To cover up what they know? Are UFO investigators spies, “useful idiots” (as they’re known in the spy trade), or just in it for the buck?

An online adventure illustrates the difficulty of getting answers.

A woman in Hamilton, Montana, was speaking to Peter Davenport, head of the National UFO Reporting Center in Seattle about a UFO she said was above her house. She said she heard beeps on the radio when it was hovering. As they spoke, some beeps sounded.

I recorded the beeps and posted a message on a hacker’s Internet group asking for help.

I received an offer of assistance from the LoD, the Legion of Doom, a well-known hacker name. I emailed the beeps as an audio file to them. They examined the switching equipment used by the Montana telco and reported that the signals did not originate within the system. They could say what the signals were not, but not what they were.

In another email, a writer said he had heard similar tones over telephone lines and shortwave radio near White Sands Missile Range. He said friends inside the base had given him “some info that would be of great interest.

“The documentation and info that I am getting are going to basically confirm what a member of the team has divulged to me [about UFO occupants].

“They are here and they are not benign.” Into the Twilight Zone

Without corroboration, that’s as far as the Internet can take us.

Words originate with someone — but who? Is the name on the email real? Is the account real? Was the White Sands source who he said he was? Were his contacts telling the truth? Or was he a bored kid killing time?

Plato was right. We need to know who is speaking to evaluate the data.

A number of years ago, I volunteered to be Wisconsin state director of the Mutual UFO Network in order to listen firsthand to people who claimed to have encountered UFOs. I brought sixteen years’ experience as a counsellor to the project. I listened to people from all walks of life.

My interest in the phenomena had quickened in the 1970s during a conversation with a career Air Force officer, a guy with all the “right stuff.”

A fellow B47 pilot told him of an unusual object that flew in formation with him for a while, then took off at an incredible speed. The co-pilot verified the incident. Neither would report it and risk damage to their careers.

I have seen that look many times since as credible people — fighter pilots, commercial air line pilots, intelligence officers, and just plain folk fishing on an isolated lake or walking in the woods after dark — recounted an experience they can’t forget. They don’t want publicity. They don’t want money. They just want to know what they saw.

Data has been accumulating for fifty years. Some is on the Internet. Some is trustworthy. Much of it isn’t.

Are we hunting a Snark, only to be bamboozled by a boojum? Or are we following luminous breadcrumbs through the forest to the Truth that is Out There?

The Net is one place to find answers, but only if our pursuit of the truth is conducted with discipline, a rigorous methodology and absolute integrity.